Meredith (Merit) Fermino is a strong, positive and compassionate advocate for increasing female representation in male dominated trades, enjoyed working in landscaping internationally and in Australia, and now works hard as a painting labourer. Merit kindly put aside time to speak to us about her experience, perceptions and advice to current and future tradeswomen.

Tell us about your background, as well as your trade journey that brought you to Australia.

I grew up in Boston, Massachusetts and grew up in a family that had strong values in that women could do anything. I always had tools in my hand early on, thanks to my Dad, and grew up working in the garden, thanks to my Mother. When it came time to choose a career, I felt pushed into going to University – I completed a five-year Bachelors Degree, but it wasn’t really what I wanted to do. Initially I wanted to work on a large property, a farm, because working outside was something I really wanted to do. I really tried to get into this kind of work, but no-one would give me a shot. That didn’t deter me – I used my degree to get an administrative job in a landscaping business!

I ran the logistics for a landscaping business for a year, sat behind a desk (which was hard for me) and used this time to learn the trade – plant names, running teams and creating quotes. A year to the day of commencement, I quit and moved to the Caribbean to work outdoors in property management for an eco-resort. I then returned to Boston and commenced a position as a landscaping labourer – an amazing experience, as I was working with two female managers and learned a lot from them. I then got the chance to move to Australia, working as a landscaper in Sydney for another female manager for about two years. When this business was dismantled, I moved up to rural Queensland and worked as a landscaper at the Woodford Music Festival.

I worked in an all-male crew – I was the only female, and the only one under the age of 50. Thankfully the Festival was run by female managers, so the men in my team were already used to working with females. They were old school in their approach but taught me so much – they showed me how to drive a bobcat as well as perform maintenance. I was there for three years, and then COVID hit.

We’re so sorry that you were affected – a lot of our tradeswomen have experienced job insecurity and retrenchment. How did you deal with the situation, and was this behind your reason to change trades?

For someone that has started afresh so many times, I feel like I’m more conditioned to deal with these kinds of situations. I am always open to trying new things too, being challenged and thrive when conditions aren’t ideal. On the other hand, I also felt panic and sadness – working for the Festival for three years, it started to feel like my home.

The first thing I did was give myself a break – I knew it was going to have a hard time finding work, and my old contacts in landscaping were no longer around. After a short amount of time, I started to look around for networks to reach out to in order to find a job. My friend came across the painting labourer position, but in the process of reaching out, I found real comfort in the support systems tradeswomen networks could offer.

After a little bit of time, I started to look around for work and got a few interviews. Let me tell you – they were bad!

Tradeswomen networks are fabulous in giving you support, advice and hints on job opportunities when you need them. Before you found your current job, I understand that you were interviewed for a few trade positions beforehand.

Yes – I started to look around for opportunities, and let me tell you, some of those interviews and businesses were bad! It wasn’t about the jobs themselves – I’m happy to take on small, large, difficult dirty jobs. But as a female in trade, you hear some of the things said – the red flags go up – so I didn’t even consider some of them. Some of the interviewers referred to tradeswomen as “chicks”, asking inappropriate questions, and when it came to agreeing to a decent salary they wouldn’t consider it. When it came to discussing remuneration, it was obvious that they weren’t paying their current female trade staff a proper wage. In my gut, it just didn’t feel right.

We’re really happy to hear you’re now working in a completely different trade, and loving it. Tell us more about it.

I’m now a painting labourer in the Sydney area, and it’s a completely new experience.

Tell us more about your experiences in working two male dominated trades?

My background helped in relation to having positive male role models – my father was incredibly supportive and encouraged me to work with tools, and my grandfather was a carpenter too.

When I started to work in trades, I was really lucky to work with supportive men and women in landscaping – real advocates who taught me a lot. But there are times when you encounter some people whose behaviour is a real let-down – I remember when I emerged from underneath a mower some men would be absolutely shocked to see me there (as if I didn’t belong), the comments that they didn’t want to work with me because I’m a woman, or “don’t send her because she won’t know what she’s doing”. The guys in my crew found these comments really funny because they knew my capabilities, but for me hearing these comments and seeing this behaviour was confronting.

I really feel the guys that I worked with then (in landscaping), and the ones I work for now (in painting), are really supportive and are real advocates for women working in trades.

What drove you to work in a trade, and become an advocate for tradeswomen?

I think women have so much to contribute to trades – our ability to multitask, our attention to quality, our productivity – our contribution is just as important as men. So I think it’s really important more women participate in trades.

Personally, I want my nieces to know that they can be anything – a firefighter, a tradie, a nurse, a teacher, whatever they choose to be. I’m so glad that my father is still able to put tools into the hands of the next generation, to still be a role model, and that my nieces can take up a trade too if they want to.

You must be incredibly proud of your father as well as your nieces. From your background and experience in working in different trades, what advice would you like to pass on to current and future tradeswomen?

Know your worth, don’t be afraid to tell people this, and don’t be afraid to talk about remuneration – know the baseline in your industry and stick to what you know you’re worth. My experience, in the landscaping industry, what I got paid five years ago, companies still want to pay me what I was paid then!

Let your work speak volumes about you too. You’ll work hard to learn the skills and experience, and look forward to getting comfortable in your abilities, and your workplace will also know your value too.

Know that you’re getting into the trade not just because you are passionate about what you do, but that you are there changing the industry just by being there. Together we are pushing against the barriers – our mothers and grandmothers did the very same thing for us – and you’re working against those barriers for the women coming after you. Thanks to your efforts, you can be happy knowing that future tradeswomen will have to push against that glass ceiling a little less each time. I’m proud to work in a trade where, not so long ago women had no visibility, now we’re working towards equality.

Take the opportunity, if you can, to mentor or train another female in your trade.

Understand that the culture and behaviours can be confronting. Some days are just a hard slog, and trying to change the behaviours is emotional and frustrating. But know that the guys around you are listening and responding bit by bit.

Ensure you have a good, strong support network of tradeswomen around you so you can discuss issues, ideas as well as the kinds of tools you use. It’s great to talk to other women that have had the same experiences as you, support you when you need it, and like the same things you do. Also attend tradeswomen events when you can.

If you’re starting out, don’t be scared to try a trade out – do what I did and work with tools, get some work experience, work at a hardware store or Bunnings – just to figure out whether this is right for you and you’re not overwhelmed and have a bit of experience under your belt.

Find a job you love, and you’ll never work a day in your life – until I worked in a trade, I didn’t know what I loved until I got that experience.

Also don’t feel badly if you get your foot in the door with a trade company, and have to tell them that working for them is just not right for you. Sometimes women feel that they have to stay in a trade position because a company has finally given them a chance – if it doesn’t feel right for you, feel safe in the knowledge that can walk away to find the right company and position for you

We thank Merit for sharing her experiences and her advice. Her passion and positive nature is just infectious, and we hope that she continues to exert her positive influence to other women through mentoring, training and advocacy. 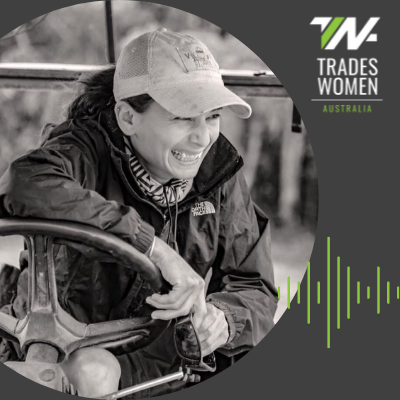