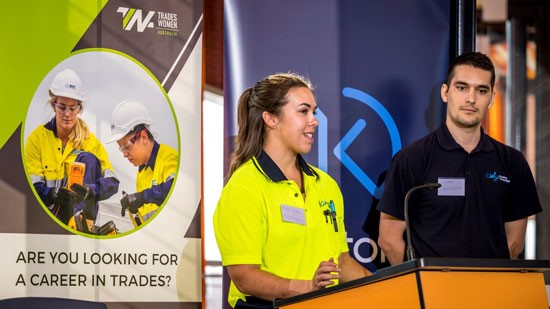 Kit McMahon, Chair of Tradeswomen Australia today welcomed the change to focus on gender equity, saying the implementation across Government policy would provide a major boost to the economy and create increased employment and career opportunities for women.

“We agree with the opening line in the Budget’s Women’s Statement that “Gender inequality is holding Australia back.”

The return of gender-based budgeting will be transformational and key to changing gender inequality in Australia.”

“We are pleased to see that for this Budget collaboration across portfolios to ensure that programs addressed gender segregation across the Australian labour market.

While the inclusion of targets for women in the skills guarantee is one mechanism for change, we know that just ‘adding women’ will not actually change the systemic and structural barriers to inequality.

There must be investment in changing the cultural drivers of inequity – stereotyping, discrimination, bias, and the regulation that perpetuates these – and building capacity and capability in our labour market and skills systems to build equitable skills system and job market.

“Despite the fact that women represent 50% of the Australian population, the participation rate of women as apprentices/trainees in the non-traditional trades, especially the core trades of construction, automotive and electrical, has remained at less than 2% and has changed little over the last 25 years.

Ms McMahon said Australia’s critical skills shortage, which continues impacting on the economic recovery, is a key driving forces for breaking down the barriers for women to access well paid trade jobs in support of businesses and the community.

“The destructive floods throughout eastern Australia, which have destroyed thousands of homes and businesses, highlights the importance of the Federal Government’s Gender Equity Policy being implemented across Australia to build and maintain the Skills of the Nation.”

Ms McMahon said it is important the Federal Government provides a clear roadmap on how the Housing Accord will address the segmentation of employment in the labour market to engage both female apprentices and mature women.

“TWA Group see a real opportunity in making sure that the process to implement such major reforms such as the Housing Accord provides the Federal Government and partners with a real opportunity to apply a gender lens to male dominated trades, and their skill pathways to change the story in these workplaces and provide women the opportunities for meaningful well-paid work to thrive.

“TWA Group looks forward to working with the Federal Budget to make this a reality.”

Kit McMahon, Chair of Tradeswomen Australia is available for comment.