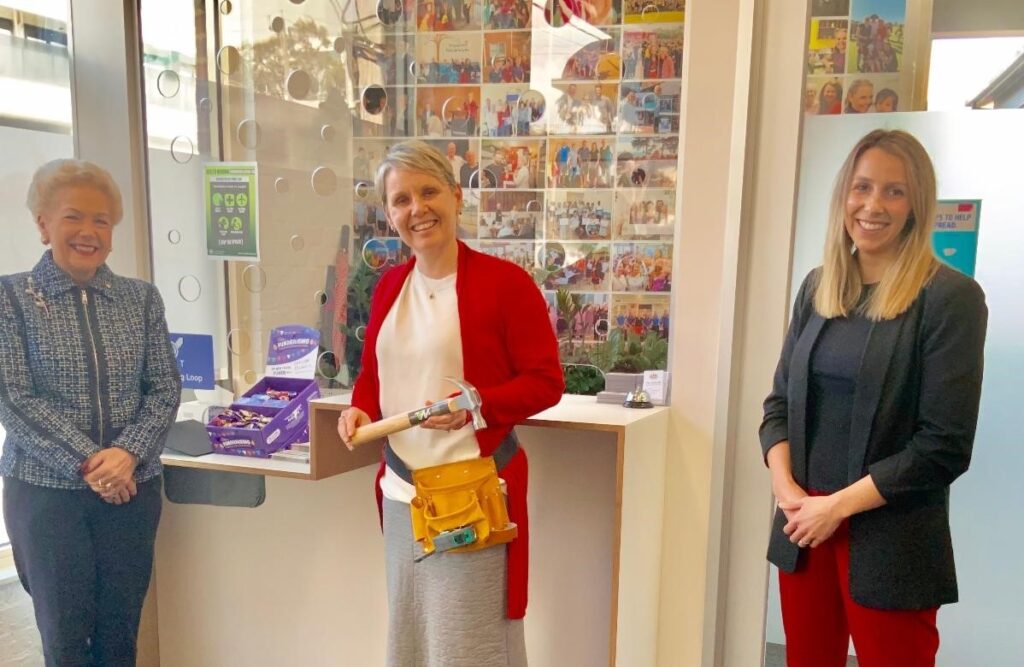 Susan Alberti AC and Fiona McDonald, on behalf of Tradeswomen Australia, presented the Federal Member for Dunkley, Peta Murphy MP, with a hammer and nail bag as a symbol of women becoming increasingly important to the future of Australia’s building and construction industry.

Ms McDonald said an analysis of the jobs held by the resident population in Frankston City in 2019 showed 24% had a trade certificate against the Victorian average of 17%. “It is important to harness the skills and talents of women in all trade areas to work alongside men and expand the trade and production capacity of Australia as a nation.

“One of the major challenges to improve the number of women included in the trades starts with the provision of more information for career counsellors in schools and creating an awareness of the increasing number of women entering the trades.

“Currently in major trades such as automotive, carpentry and plumbing, women account for just 2% of employment, a level which has existed for a quarter of a century.”

Tradeswomen Australia was established to encourage, recruit, and retain women in skilled trade roles that are male dominated. By recognising the need for change in social attitudes Tradeswomen Australia supports businesses to take the lead and remove the barriers for women who wish to enter their trade.

The National Skills Needs List (2019) lists 65 trades that are experiencing national skills shortages. Of those, 62 can be classed as male-dominated trades, only 3 could be classed as female-dominated. There is no reason why these roles could not be filled by women who make up 50% of Australia’s population.

“In the context of current skills shortages in Australia, under-representation of women in key industries is not only bad for gender equality, it undermines Australia’s economy and growth opportunities,” Ms McDonald said.

‘Boosting women’s workforce participation is essential to raising living standards and securing Australia’s future prosperity. It has the potential to add up to $25 billion to the Australian economy.’ * ²

Gender workplace statistics at a glance 2019-20