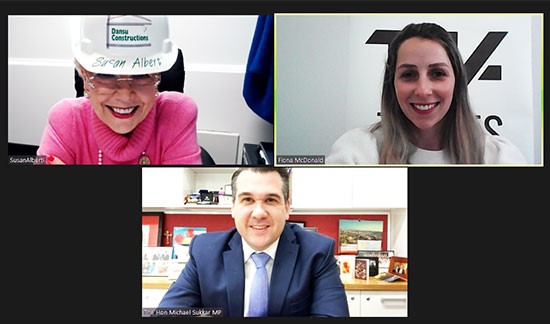 Susan Alberti AC, Patron of Tradeswomen Australia, said the current financial and social challenges being faced by the Australian community because of the COVID-19 pandemic meant that every job counts, and the stimulation of the construction industry with incentives is vital to maintain existing workers and apprentices.

“In these difficult times, expanding the building and construction industry workforce, with men and women, is an important long-term strategy to strengthen the capacity and financial contribution of the industry to the national economy.”

Ms Alberti welcomed the support of Minister Sukkar and the Federal Government to the building and construction industry through the Home Builder Grants program, estimated to provide around 27,000 grants at a total cost of around $680 million.

“Behind every one of these Home Builder Grants stands urgently needed jobs for tradesmen and women and the work engagement of apprentices,” she said.

Fiona McDonald, Managing Director of Tradeswomen Australia, also welcomed the recent announcement by the Prime Minister, Scott Morrison, to invest $1.3 billion to support apprentices and trainees maintain their employment and training across Australia to help more than 70,000 small businesses keep around 117,000 apprentices.

Ms McDonald said the investment commitment by Federal Government to protect and expand apprenticeships and training in the trades provides a major opportunity to increase the number of women apprentices /trainees in the core trades of carpentry, automotive and electrical, which have remained at less than 2% for over twenty-five years.

“Increasing the number of women in the building and construction industry is about the Federal and State Governments, along with industry, working towards dealing with Australia’s Skills Shortage.

“Given more than 50% of the Australian population is represented by women, it is time to utilise this national skills base which would lift national employment and productivity,” she said.

Ms McDonald said in 2012, the Grattan Institute found that if there was an extra 6% of women in the workforce, we could add up to $25 billion, or approximately 1%, to Australia’s Gross Domestic Product.