Women Across Australia Urged to Consider Trades Apprenticeships and Jobs 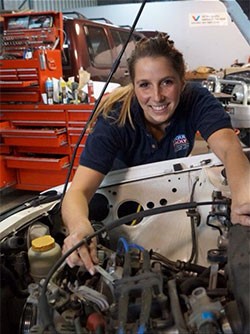 Girls completing school at the end of the year are being urged to consider trade apprenticeships or employment in the trades areas to take advantage of the Federal Government’s $2 billion skills push amid deepening unemployment.

Fiona McDonald, Managing Director of Tradeswomen Australia said, the investment commitment by the Federal Government provides a major opportunity to increase the number of women apprentices /trainees in the core trades of carpentry, automotive and electrical, which has remained at less than 2% for over twenty-five years.

Ms McDonald, who trained as a motor mechanic, said “currently, one of the major challenges is overcoming the lack of knowledge at school level and with parents, that women have the potential and the ability to have successful, rewarding careers in the trades.

“Given the large numbers of job losses which will impact on women’s employment, it is an important time for women to explore wider horizons for employment in the trades.”

“Increasing the number of women in the building and construction industry is about the Federal and State Governments, along with industry, working towards dealing with Australia’s Skills Shortage.”

“Given more than 50% of the Australian population is represented by women, it is time to utilise this national skills base which would lift national employment and productivity,” she said.

Ms McDonald said in 2012, the Grattan Institute found that if there was an extra 6% of women in the workforce, we could add up to $25 billion, or approximately 1%, to Australia’s Gross Domestic Product.