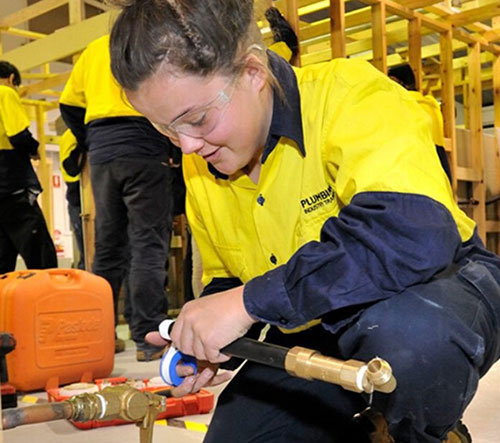 “My dad is an electrician himself and has told me I would be happier with
another career path, and my teachers all believe it’s not the path I should
take, because I’m a woman.”
Research released on the barriers faced by females wanting to enter male dominated trades has provided a major focus and valuable resource for Government, industry and Australia’s education framework for the future, Tradeswomen Australia said today.
Fiona McDonald, Managing Director of Tradeswomen Australia, speaking at the online launch of the results of Year13 and VERTO’s survey of over 1,000 females aged 15 to 24 from across New South Wales, said that whist the survey reflected some positives, it revealed many young women faced challenges closer to home and face significant negative community attitudes to pursue a trades career.
Ms McDonald said, “It is important for young girls and women to have encouragement and support from parents and schools to explore their options, especially as many traditional job opportunities are changing.”
“In my personal experience, after being discouraged at school to take up a trade and steered into a university course which lasted six months, an opportunity arose to become an apprentice car mechanic and I enjoyed a twelve-year career as a qualified motor mechanic.”
Ms McDonald said Tradeswomen Australia is building an online resource for young women wanting to take up a trade or those women who are already qualified as a tradesperson and need support. The online resource also includes ‘Operation Protect and Preserve’ which provides support for apprentices facing employment difficulties during the current COVID-19 shutdowns.
Excerpts from the Year13 and VERTO report
“Parental and societal expectations of females in trades and careers generally were also found to be a significant hurdle in females entering these industries. Alongside this, a lack of support in high schools for females wanting to pursue trade-based apprenticeships was found to add to the sense that it is not a viable career path for females to enter. When asked who had encouraged them to pursue a trade, just under two thirds of respondents said nobody had, while 18% said their parents had and 13% said their teachers had.
The results of Year13 and VERTO’s survey of over 1,000 females aged 15 to 24 from across New South Wales have found that while there is a relatively strong interest from senior school students and recent graduates in doing an apprenticeship, a ‘boys club’ stigma means many are apprehensive about working in an environment with a lack of female support.
Visibility was also raised as a significant issue, with some respondents reporting that they had never seen a female tradie. Similarly, a lack of women teaching VET subjects and related subjects like Design & Technology in schools was raised as also leading to this lack of visibility and therefore awareness of what females could achieve in these industries. More female support in the recruitment and training process were highlighted as a key measure needed to alleviate the stigma of male-dominated trades.” *
“Trades could be more appealing to females by providing brochures, seminars and career open days for women wanting to work in trades, by successful women working in trades. No female I have ever spoken to is inspired to work in a trade or feel it is a viable option after an expo run by men, directed at men.” Aged 17, New South Wales. Reference: Year13 and VERTO, ‘Females in Trades and Apprenticeships New South Wales Survey’, Research Results and Findings July 2020
VERTO Chief Executive Officer, Ron Maxwell, said the report shines a damning light on why females continue to reject apprenticeships as a viable career option.
“In my opinion, the career guidance programs in our schools need to rethink the way trades are discussed, particularly with female students.”
Year13 Co-founder, Saxon Phipps, said the government’s prioritising of the VET sector will help more young women see it as a viable career option.
“With the technological evolutions we’re seeing in these traditional trades it’s now becoming less about the distinction between traditional white and blue-collar worker and creating a ‘new-collar’ worker which can be more appealing to women.”
FULL REPORT DOWNLOAD HERE
https://www.verto.org.au/images/VERTO_YEAR13_-Females_in_Trades_Apprenticeships_NSW.pdf
WEBINAR LINK August 26th 6.30 PM
https://year13.com.au/expo/live/future-of-work/events/overcoming-stigma-trades
In order to access the webinar, click Link and sign in to create a free account with Year13 using your email address.
Media Enquiries:
Ron Smith, Media Communications, Tradeswomen Australia
Mobile: 0417 329 201
News & Media